All news from Kudymkar and Permian Komi State of Permland in English. 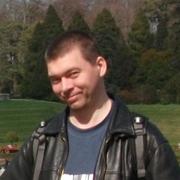 Ancient Komi-Permyak's year began on 21st of March, the day of Spring Equinox. The year had nine "months", each of which had its own patron - game beast.
A magical object representation of the Komi calender is a flat bronze ring with animal figurines of animals hung on it. Not everybody had such calender ring, but only the most influent magicians, who could use its power.
The time in this calender moved counter-clockwise. The first month, Bear Month, lasted since the end of March till the end of April. Since the end of April till the end of June there went Stag Month, then, till the begin of July -- Stoat Month; then, till the beginning of August - Glutton Month. Since the beginning of August till the very beginning of October the elk was the master of the month. On 23rd of September comes autumnal Equinox which was marked on calender by the sun-like sign near the muzzle of the elk. Since the beginning of October and till the middle December there lasted the time of the Otter. Then the Fox Month came until the end of January. Fox's tail bears a notch marking winter Solstice. The Squirrel Month lasted since the end of January till the end of February, and then the last month of the year was beginning, the Marten Month.
Nowadays there is no one who can explain how to use for magical purposes this wonderful device - an annular calender of the Komi.