Oliver Loode. Kafkaesque Russian Foreign Policy, Or What Are Young Finno-Ugrians Guilty Of? 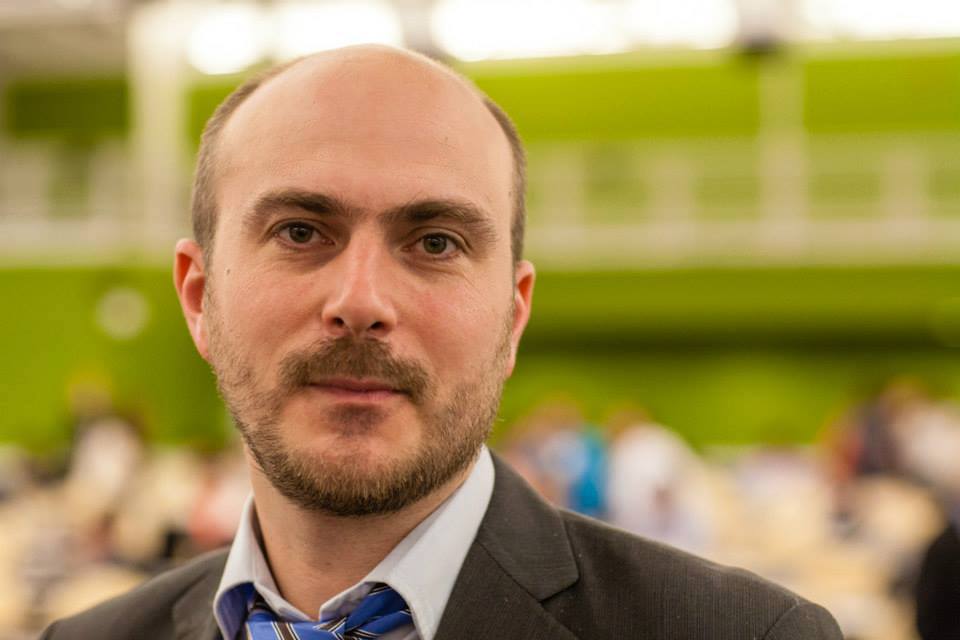 „Someone must have been telling lies about Josef K., he knew he had done nothing wrong but, one morning, he was arrested.“

Thus begins Franz Kafka’s famous novel, „The Trial“, where the protagonist Josef K. is prosecuted for a crime that neither he nor his accusers appear to know about. Sadly, these kinds of situations are not only a matter of fiction. A case in point is Russia’s recent bizarre behaviour towards leaders of its indigenous peoples in advance of the World Conference on Indigenous Peoples (WCIP) – a high-level plenary meeting of the United Nations General Assembly held on September 22-23 in New York.

By now it has been thoroughly documented how several indigenous activists from Russia, including Mr. Rodion Sulyandziga, Ms. Anna Naikanchina and Ms. Valentina Sovkina – all of whom are important and well-known figures in the international indigenous peoples’ scene -  were prevented to leave Russia to attend WCIP, a landmark conference dedicated to the rights of indigenous peoples.

Methods used ranged from blowing out car tires to ripping off pages in passports to prevent departure to New York, during the period Sept 18 – 21. To my knowledge, these kinds of acts were committed towards at least six Russia’s indigenous participants of the conference (not counting the violent attack on Mr. Nadir Bekirov, a Crimean Tatar activist, that took place in occupied Crimea) ; the true count may be higher as not all activists dare to make their story public. Taken together, these acts appear to be part of a coordinated campaign that could have only been sponsored by the Russian state (via one or more of its institutions).

The resulting damage to Russia’s international reputation from these incidents has been massive. It has been covered on front pages of news channels such as BBC Russian Service and Al Jazeera America, has received condemnation of several heads of state, UN officials and human rights watchdogs. Not to speak of the waves of contempt among indigenous delegates at WCIP from all over the world who consider their fellow activists from Russia not just colleagues, but brothers and sisters.

In fact this scandal has become the bigger story with respect to the conference than the long-awaited adoption of an important outcome document calling for states to do more to implement the UN Declaration on the Rights of Indigenous Peoples (which, incidentally, was adopted with Russia’s consent).

There are two important unanswered questions for me regarding these incidents. Firstly, which state institution(s) ordered and/or approved them?  And secondly, what precisely was the crime committed, or threat presented by these indigenous activists that merited such harsh treatment, violating their rights to free movement and preventing them from performing their civic responsibilities in front of their NGOs, and even more importantly, their peoples – indigenous peoples of Russia? These questions are not only relevant for the relatively compact community of indigenous activists, but for the Russian society at large. Indigenous peoples are some of the most vulnerable people in all societies, in both so-called developing and developed world. The way a state treats the weaker and disadvantaged parts of its population says something important about its values and moral core.

Let’s start with the question who commissioned these acts.  Shortly after the conference I have heard opinions that this may have been a rough job by FSB that had not been coordinated with Russia’s Ministry of Foreign Affairs (MFA). As for the role of FSB, this is almost indisputable as it was reportedly FSB officers who invalidated the passports of Mr. Sulyandziga and Ms. Naikanchina at Sheremetyevo Airport.  Questions remain however about the role of Russia’s MFA. Some participants of WCIP have reported genuine surprise by Mr. Gennadi Gatilov (Vice-Minister of MFA and head of the official Russian delegation at WCIP) upon hearing during opening plenary session from Mr. Sauli Niinistö (President of Finland) that several activists from Russia had been prevented from attending the conference. Soon thereafter the entire official Russian delegation left the room to discuss the situation, and allegedly Mr. Gatilov placed a call to Mr. Sergei Lavrov (Russia’s Minister of Foreign Affairs), to inform him about this situation. Clearly, what had just transpired in the halls of the United Nations General Assembly, had become something of an international scandal and a public embarrasment for Russia.

Whether or not this particular crackdown campaign on indigenous activists between September 18-21 was in fact unknown by Russia’s MFA is something of a mystery, and may remain so for a while. However, what has not been reported to date is that these were not isolated events coming out of nowhere, but that they were preceded by acts of similar kind, albeit of softer nature – and this time, with the active participation of the MFA, thus directly reflecting Russia’s foreign policy towards indigenous peoples.

The key to understanding this lies in MFA’s behaviour towards two organizations associated with the so-called Finno-Ugric movement – Youth Association of Finno-Ugric Peoples (MAFUN) and „Komi Voityr“, the national movement of Komi people, well in advance of the WCIP.

As a matter background, the Finno-Ugric movement is a loose network of non-governmental organizations and civic activists who share the common goal of preserving and promoting languages and cultural heritage of Finno-Ugric and Samoyed peoples, many of whom reside in the Russian Federation and can be considered indigenous by both international and Russian domestic standards. The key event of the Finno-Ugric movement is the World Congress of Finno-Ugric Peoples that takes place every four years, and that has been attended by Presidents of Russian Federation, Hungary, Estonia and Finland – i.e., countries with the largest populations of Finno-Ugric peoples.

During the first week of August, ie more than a month before the Conference, Office of the President of the UN General Assembly sent to diplomatic missions at the UN a list with indigenous NGOs that had registered for the conference, giving UN member states a possibility to comment on, and if needed, object to the participation of specific NGOs.

Great majority of the NGOs in the list received no objections from any member states. However, two NGOs whose participation had been objected to included the Youth Association of Finno-Ugric Peoples (MAFUN) and Komi Voityr. Given that one of them (Komi Voityr) is based in Russia, and the other (MAFUN) an international umbrella association with significant membership from Russia, the only suspect for this action was the Russian Federation. I have subsequently confirmed with multiple UN officials familiar with the matter, that it was Russia (and no other state) that objected to the participation of these two NGOs, offering no or extremely vague rationale for its objections. It would be therefore disingenuous for the Russian MFA to claim that they have not been involved in suppressing participation of indigenous NGOs in advance of WCIP. Personally I consider that one led to another, and what happened with indigenous activists on August 18-21 was a harsher version of the same policy that was earlier applied towards Finno-Ugric organizations.

Coming to my second question, what exactly was the guilt, or perceived threat presented by these two Finno-Ugric organizations? For the sake of brevity, let me focus here on one of them: MAFUN – an organization that I have been involved in as a Board Member, and continue to collaborate with.

According to its Statutes, key goals of of MAFUN – founded in 1990 and thus being the oldest international Finno-Ugric organization – are to encourage cooperation between the youth of Finno-Ugric and Samoyed peoples, preserve and develop their languages and culture, and to protect their rights. (RUS: http://www.mafun.mol-rm.ru/index.php/en/2011-08-29-08-41-38 /). MAFUN’s real-life activities are consistent with its stated goals.

The flagship project initiated and led by MAFUN is „Finno-Ugric Capitals of Culture“ – a programme oriented at Finno-Ugric villages in order to stimulate their socio-economic development, to raise awareness of Finno-Ugric languages and peoples, and to strengthen a common Finno-Ugric identity. This year, the first Finno-Ugric Capital of Culture has been an Udmurtian village of Bygy that has organized several cultural festivals, for example a festival of Finno-Ugric cuisines „Byg-Byg“.  As a result of this year, the village of Bygy is on a faster development track both in terms of culture, civil society and infastructure. This is hardly subversive activity endangering the statehood or territorial integrity of the Russian Federation, quite the opposite. Stronger villages make a stronger Russian nation and state. Therefore, through its activities MAFUN is making a public service to Russia for what it deserves acknowledgement rather than harassment by its government.

As a board member of MAFUN representing in Estonia during 2011-2013, I cannot recall a single MAFUN event that would have included criticism of the Russian state (not to be mixed up with critical reasoning on many topics relevant to Finno-Ugric peoples and youth). This is only logical – MAFUN’s activists from Russia who make up majority of the organization are loyal and proud citizens of their country and would not tolerate an anti-Russian agenda in this organization. MAFUN is an apolitical organization in both letter and deed. Rather than engaging in anti-Russian rants, MAFUN activists like to sing their national songs and have a plain old good time, as youth always do. While organizationally MAFUN is rather weak (it is not formally registered nor has its own money), its 18-member board manages to meet 3-4 times a year, MAFUN’s representatives have attended annual sessions of the UN Permanent Forum on Indigenous Issues (UNPFII) in New York since 2011, and every two years MAFUN holds its congress that adopts a resolution (the latest resolution can be read here.  Nothing subversive there, either.

With this in mind, what precisely has MAFUN done wrong to deserve an objection from the Russian Federation to attend the WCIP?

The only „guilt“ of MAFUN that I can conceive is its independence – specifically, independence from Russia’s power vertical. Current President of MAFUN, Sampsa Holopainen, a Finnish Ph.D. student of Finno-Ugric Studies at the University of Helsinki is hardly one to take orders from official Moscow (or for that matter, Tallinn or Helsinki). Nor is there any censorship within MAFUN: its board members – whether from Russia, Finland or Estonia – are free to speak their minds at both domestic and international events, including at the United Nations.  Is this – the threat of independent thought and free expression by genuine civil society – what the Russian Federation is afraid of, and what would explain its repressive, disrespectful behaviour towards its own indigenous civic activists who only want the best for their peoples and country?

This is a sad story and certainly not Russia’s finest hour. However, I still remain hopeful that there exist reasonable and intelligent officials at the Russian Ministry of Foreign Affairs - whether in Moscow or at its UN mission New York - who can see through this Kafkaesque absurdity of its behaviour towards its own indigenous peoples, and will gradually start steering its country in the right direction that is, first and foremost, in the interest of Russia itself.