Religion is irrelevant anymore in 9 countries 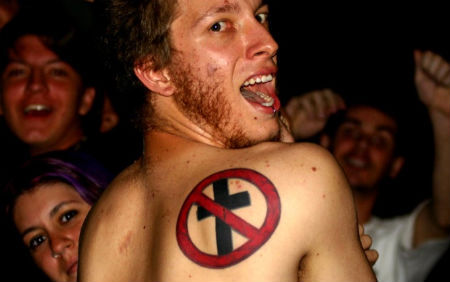 A new study of census data from nine countries around the world has ascertained that, statistically, religion in those countries is going the way of the pterodactyl.

Led by Daniel Abrams, a mathematician at Northwestern, and Richard Wiener, a physicist with the Research Corporation for Science Advancement, a research team looked at information from countries whose censuses query residents about their religion: Australia, Austria, Canada, the Czech Republic, Finland, Ireland, the Netherlands, New Zealand, and Switzerland. The team then created a mathematical model that "attempts to account for the interplay between the number of religious respondents and the social motives behind being one."

Confused? Don't be, says Wiener. "The idea is pretty simple," he said at an American Physical Society meeting in Dallas this month. "It posits that social groups that have more members are going to be more attractive to join, and it posits that social groups have a social status or utility. For example in languages, there can be greater utility or status in speaking Spanish instead of [small Andean language] Quechuan in Peru, and similarly there's some kind of status or utility in being a member of a religion or not."

The researchers discovered that there's a decreasing utility to religion in many secular democracies, causing fewer and fewer people to identify as religious. In the Netherlands, for instance, 40 percent of people said they were "non-religious." And in the Czech Republic that number was 60 percent. In the end, in all nine nations in the study, signs pointed toward futures in which 100 percent of the population had no religion at all.

Data aside, Wiener was willing to admit that religion may never die out completely in the countries studied—"Obviously much more complicated things are going on with any one individual," he said —but it's interesting to consider what a future without religion might look like, especially in a place like Ireland, whose history is hideously and inextricably linked to religion.